Upgrade to the Best Platform for Microsoft SQL Server Consolidation

Accelerate application lifecycles and improve application quality of service by consolidating your SQL Servers on the private cloud VMware vSphere. With vSphere, you can consolidate your SQL infrastructure by 4X to 20X and cut hardware and software costs by more than 50% while avoiding the painful compromises associated with traditional database consolidation. Run SQL on vSphere with the confidence that even large databases will perform well in virtual machines. 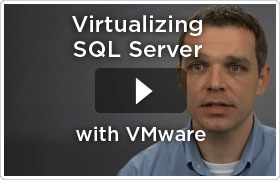 IT departments have been undertaking database consolidation projects for many years, hoping to rein in the costs associated with rapidly increasing number and size of databases supporting a multitude of applications.

Consolidate SQL on vSphere to Cut Costs by 50%

Free your databases from the constraints of static, dedicated infrastructure to:

Reduce hardware and software costs by more than 50%: Databases are among the most over-provisioned applications in the datacenter, with average CPU utilization close to 5%. Because of this massive over-provisioning, databases have tremendous consolidation potential. On average, VMware customers are able to consolidate their databases by a ratio of 4X to 20X. By consolidating, you not only reduce your hardware footprint, but also consolidate your expensive database licenses and realize tremendous cost savings on software.

Microsoft officially supports VMware ESX for running Microsoft Windows and major applications including Microsoft Exchange, SQL Server, and SharePoint Server. VMware ESX was the first hypervisor to be validated under the Microsoft Virtualization Validation Program (SVVP), providing customers who run Windows Server and Microsoft applications with cooperative support from Microsoft and VMware. Customers can now run Exchange on vSphere with the peace of mind that they will receive the same level of support they received on physical servers.

Virtualizing Microsoft SQL Server on VMware vSphere simultaneously consolidates databases and optimizes compute resources, whilemaintaining application flexibility by isolating each database in its own virtual machine. You can migrate SQL Servers in their current state without expensive and error-prone application migrations. We and our partners have demonstrated the capabilities of vSphere to run the most challenging SQL Server workloads with high performance databases. For smaller, departmental databases, vSphere offers high consolidation ratios and advanced resource scheduling features.

Large multi-core servers have become the norm, but most SQL instances do not require 8 or more cores. With vSphere, smaller SQL databases can be consolidated easily to fully utilize large servers and achieve consolidation ratios of 10X or more.

Preserve your existing SQL Server configurations when you consolidate SQL Server using vSphere, by doing a "Physical to Virtual" (P2V) migration. No changes are required to the OS or SQL Server versions, no application migration is required. Even the IP address and server name remain unchanged.

Realize significant cost savings on your software licenses. Once all the physical processors of a host have been licensed, you can deploy an unlimited number of SQL virtual machines (depending on the SQL edition that is licensed), consolidating licenses on a small number of physical processors.

Exceed the Performance of Physical Servers

vSphere 5.0 delivers the best performance out-of-the-box thanks to key enhancements such as:

VMware vSphere 5.0 can match or exceed native performance for more than 99% of SQL instances. A recent TPC-E workload study demonstrated that in typical situations, virtual machines provide 90% to 98% of the native physical performance, even for larger 8 vCPU configurations.

Mutiple SQL Server virtual machines can be consolidated onto a shared ESXi host with minimal impact to individual virtual machines. vSphere ensures fair distribution of resources even with the most intensive workloads to achieve impressive aggregate throughput.

On physical hardware, deploying a new SQL Server can take days or weeks to procure the hardware, install and configure the infrastructure, and install the associated applications and updates. Eliminating repetitive OS installation and patching tasks with virtual machine templates can speed deployment times. You can deploy new virtual machines with a core configuration in a matter of minutes, allowing rapid provisioning of applications into production.

Databases are particularly difficult to size. Administrators are often forced to forecast capacity requirements for 3-5 years in the future and then translate that estimate into system specifications (CPU, memory, storage). Any sizing errors require the application to be re- provisioned, causing downtime and major disruption to the application. With the vSphere Hot-add feature, applications can be provisioned in a "future proof" manner. As applications grow over time and require more compute, memory, network, or storage resources, scale up virtual machines dynamically and on the fly, without disrupting the application or requiring complex re-provisioning.

Shorten time to resolution of critical issues and reduce their overall impact on the production environment with VMware-enabled testing and troubleshooting. Use live snapshots of virtual machines to instantly roll back to a previous known good configuration. Make an exact, independent copy of any virtual machine in your environment with cloning. The copy can then be installed in a test environment for offline testing and troubleshooting. Share virtual machines with third-parties such as consultants, other partners and vendors and eliminate the need to create a duplicate environment to reproduce problems. In complex application environments supported by SQL Server, this capability is especially valuable.

Simplify application availability by eliminating the need to use complex and expensive application-specific clustering solutions. VMware vMotion and DRS can reduce planned downtime and balance workloads dynamically while VMware HA can help recover SQL Servers in the case of host failure. At the application level, all Microsoft features and techniques are supported on vSphere, including database mirroring, failover clustering and log shipping, so you can use the best features from both VMware and Microsoft.

Ensure fast, simple, and cost-effective recovery by automating the recovery process and eliminating the complexity of managing and testing customized recovery plans with VMware vCenter Site Recovery Manager. Reduce costs by eliminating the need for dedicated hardware at the remote site.

VMware ESX was the first hypervisor to be validated under the Microsoft Virtualization Validation Program (SVVP), providing customers who run Windows Server and Microsoft applications with cooperative support from Microsoft and VMware. Customers can now run Exchange on VMware with the peace of mind that they will receive the support they need.

Microsoft licensing has recently been modified to allow customers to reassign licenses between physical servers as frequently as desired. In the past, licenses could only be reassigned once every 90 days, limiting the benefits of vMotion. The new licensing flexibility enables efficient use of vMotion for Windows Server and major applications including Exchange, SQL Server, and SharePoint Server.

The following scenarios are common:

Scenario 1: VMware software was originally purchased through a server OEM

Scenario 2: VMware software was originally purchased direct from VMware or a VMware authorized reseller and the customer has a valid Microsoft Premier-level support agreement

Microsoft states that it will use "commercially reasonable efforts" to support its products running on VMware virtual machines. Customers regularly tell us Microsoft's commercially reasonable efforts are effective and appropriate to maintain operations as planned. There may be confusion within Microsoft's field and channel organizations regarding the scope of support that can be provided, and in some cases, customers may perceive that "commercially reasonable efforts" will not meet their expectations. In general, Microsoft offers its large customers excellent support for their products running on VMware. Microsoft's policy states that after such efforts are exhausted, Microsoft support specialists may request that customers replicate the issue on a physical machine in order to proceed with the investigation. See Microsoft KB 897615 for more details.

Scenario 3: VMware software was originally purchased direct from VMware or a VMware authorized reseller and the customer does not have a Microsoft Premier-level support agreement

Microsoft's level of support for these customers can be more restrictive. Before providing support, Microsoft specialists may request that customers first replicate the issue on a physical machine per Microsoft KB 897615.