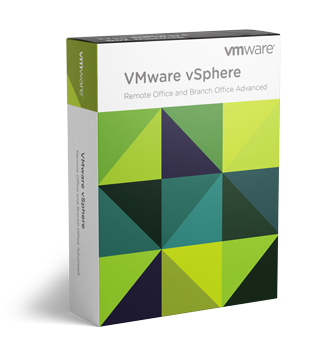 vSphere provides an enterprise platform for both traditional applications as well as modern applications – so customers and partners can deliver a developer-ready infrastructure, scale without compromise and simplify operations.

vSphere ROBO Enterprise secures data at remote locations through its unique VM-level Encryption capability designed to give users a greater degree of control to protect data against unauthorized access. Since encryption occurs at a hypervisor level, it is VM agnostic i.e. works with any VM and guest-OS. It is a great tool to ensure consistent security across thousands of remote locations.

vSphere ROBO makes it easier to perform maintenance on remote hosts with Distributed Resource Scheduler (DRS) in Maintenance Mode. It automatically moves VMs out of a server when server goes offline for maintenance and brings the VMs back to server after maintenance. The maintenance can be done remotely from a central IT location.

vSphere vMotion allows you to move an entire running virtual machine from one physical server to another, without downtime. The virtual machine retains its network identity and connections, ensuring a seamless migration process. Transfer the virtual machine's active memory and precise execution state over a high-speed network, allowing the virtual machine to switch from running on the source vSphere host to the destination vSphere host. This entire process takes less than two seconds on a gigabit Ethernet network. This capability is possible over virtual Switches, vCenter Servers, and even long distances.

Minimize downtime with uniform, cost-effective failover protection against hardware and operating system outages within your virtualized environment with vSphere High Availability (HA). Monitor hosts and virtual machines and automatically restart virtual machines on other hosts in the cluster when an outage is detected. HA provides uniform, automated protection for all applications without modifications to the application or guest operating system.

vSphere Content Library enables administrators to manage VM templates, vApps, ISO images and scripts from a central location. Organize the content into libraries, which can be individually configured and managed. Once libraries are created, share content across the boundaries of vCenter Servers and ensure consistency across your data center. Deploy VM templates directly onto a host or cluster for a consistent provisioning experience.

Host profiles, which store configuration settings shared by vSphere hosts, can be attached to one or more vSphere hosts or clusters. The host configuration is compared to the host profile and any deviations are reported so configuration drift can be corrected automatically. Administrators can create a profile once and then use it in conjunction with Auto Deploy to rapidly deploy and provision multiple vSphere hosts, eliminating the need for specialized scripts or manual configuration.

vSphere Remote Office Branch Office editions enable rapid provisioning of servers through virtualization, minimization of host configuration drift, enhanced visibility into regulatory compliance, and advanced security features through VM Encryption, across multiple sites. In addition, with the business continuity features of vSphere, you can be assured of highly available IT infrastructure in your remote sites.