VMware NSX for Horizon effectively secures east-west traffic within the data center, while ensuring that IT can quickly and easily administer networking and security policy that dynamically follows end users’ virtual desktops and apps across infrastructure, devices, and locations 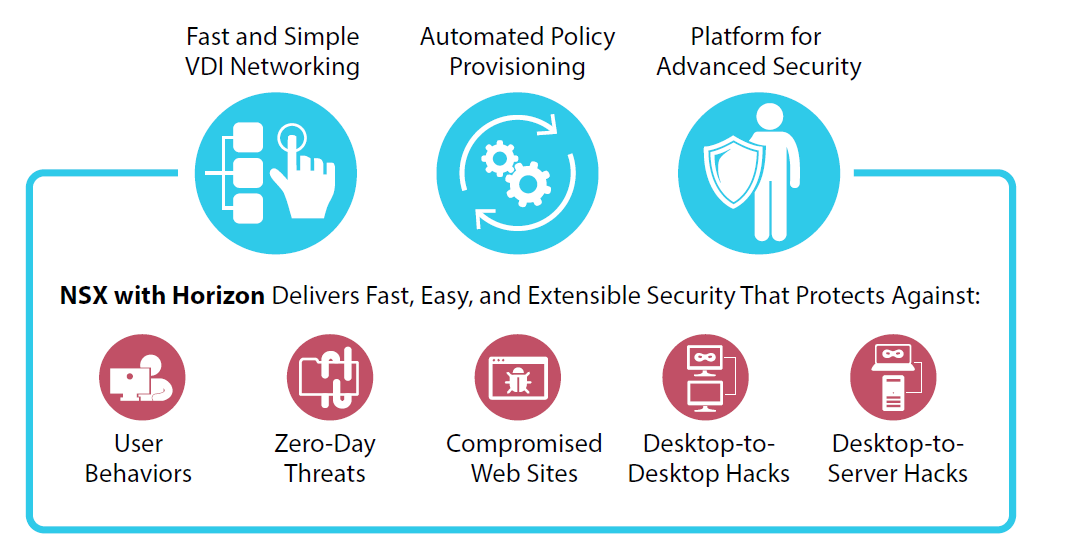 VMware NSX for Horizon brings speed, security, and simplicity to VDI networking.Within seconds, IT administrators can create policies that dynamically follow virtual desktops, without the need for time-consuming network provisioning. Extending security policy from the data center to the desktop and app, this joint solution also provides an extensible platform that integrates with industry-leading security solutions.

NSX for Horizon lets you create, change and manage security policies across all virtual desktops with a few clicks. Map these policies to user groups to accelerate virtual desktop onboarding.

Set policies that dynamically adapt to users' computing environments, with network security services that map to the user based on role, logical grouping, desktop operating system, and more—independent of the underlying network infrastructure.

NSX offers an extensible platform that can be integrated with best-in-class capabilities from an established ecosystem of security partners. By dynamically adding services, virtual desktop security can be easily extended to take advantage of malware protection, anti-virus production, and advanced threat detection.

VMware NSX for Horizon improves desktop virtualization security and helps address east-west threats by enabling administrators to define policy centrally. That policy is then distributed to the hypervisor layer within every vSphere host, and automatically attached to each virtual desktop as soon as the desktop is created. To secure virtual desktops and adjacent workloads within the data center, VMware NSX implements “microsegmentation,” giving each desktop it’s own perimeter defense. This “shrink-wrapped security” uses VMware NSX distributed virtual firewalling capability to police traffic to and from each VM, eliminating unauthorized access between desktops and adjacent workloads. If the virtual desktop moves from one host to the next, or across the data center, policy will automatically follow it.

Networking and Security for Virtual Desktops and Apps: Fast, Easy, and Extensible 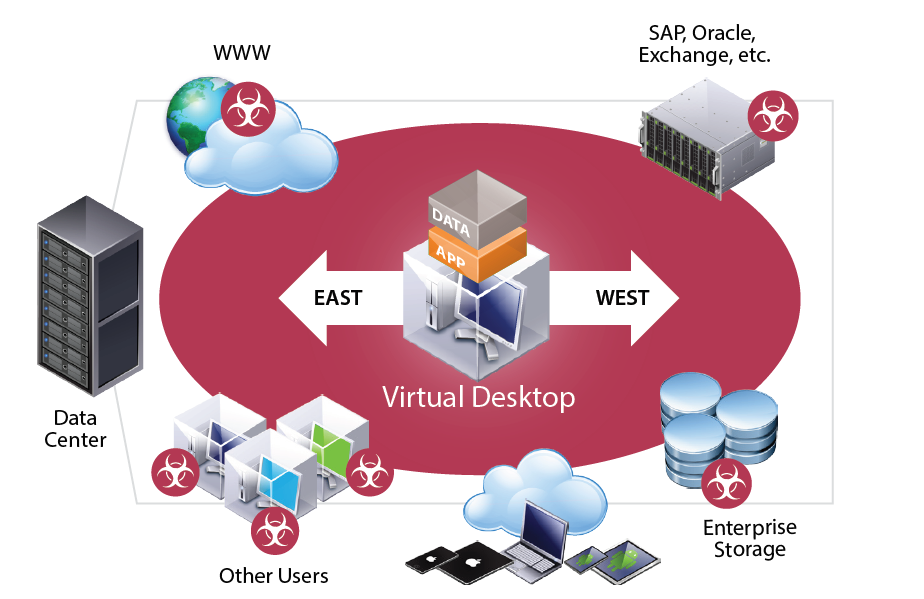 However, with desktop and application virtualization, new security concerns can arise behind the data center firewall—where hundreds or even thousands of desktops reside. These desktops sit in close proximity to other users and mission-critical workloads, making them much more susceptible to malware and other attacks. These attacks can move from desktop to server, exposing a large attack surface within the data center. This “east-west” threat scenario is a common one affecting many customers today, particularly those with stringent security and compliance mandates

Organizations seeking to administer networking and security policy that persistently follows users and workloads have also traditionally incurred a significant investment in a hardware-centric architecture that is CapEx-intensive, complex to operate, and slow to adapt to the typical dynamic business environment.

Find out how you can reduce your expenses today.